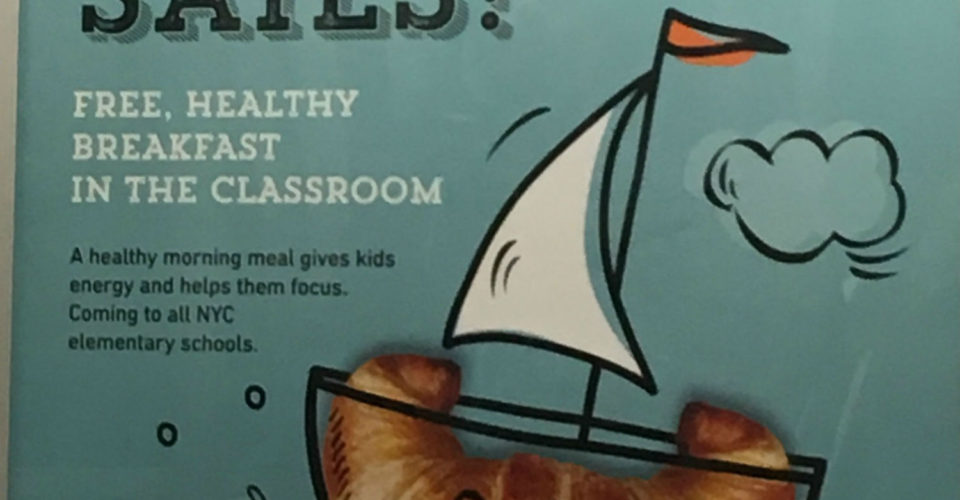 Is The New York City Department of Education Participating in Junk Food Marketing?

A Possibly Good Program (Breakfast in the Classroom) with At Least ONE Poor Advertising Choice. We asked a few experts.

The other day I noticed something interesting while traveling on a New York City subway car. A poster of an upside-down croissant with a sail inserted, designed to look like a sailboat — with the slogan, “WIND IN YOUR SAILS! FREE. HEALTHY BREAKFAST IN THE CLASSROOM.”

At first glance I thought it was an advertisement for a bakery. I certainly didn’t think it was going to be an ill-conceived ad for New York City school children and their parents, put out by the New York City Department of Education and Share Our Strength’s No Kid Hungry campaign. Both organizations  offer fantastic and wonderful programs and often have a positive impact on healthy food consumption among children. 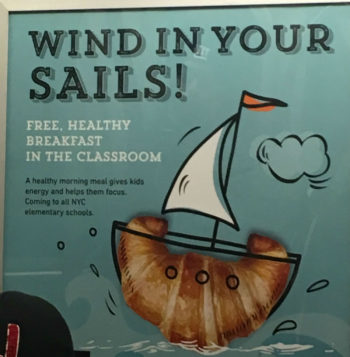 Therefore, I was surprised to see this ad, and wondered if it was a mistake. If they wanted to capture children’s attention with unhealthy food, wouldn’t they have been better off showing an image of a doughnut? How many little kids (in the Breakfast in the Classroom program or not) actually know what a croissant is? Was the NYC Department of Education (DOE) intentionally trying to get kids and parents excited about eating a croissant for breakfast by labeling it “healthy?” This is one of three posters created, both of the others show healthier images: one shows an apple; the other an apple,  a banana, an orange, and a carton of milk in the shape of a rocket ship.

This was either a well-thought-out and discussed advertisement by the NYC DOE or it was a significant error– both problematic for a variety of reasons.

The Breakfast in the Classroom program has been met with some controversy since its roll out, including a lack of evidence supporting increased student achievement while taking time away from student learning. Our critique is not meant to fuel that fire, but to highlight flaws and missed opportunities in a piece of the program’s marketing.

What is Healthy? Is a Croissant So Bad?

First, let’s take a peek at the term “healthy.” Under Merriam-Webster’s definition of healthy you’ll see phrases such as “free from disease or pain” or “beneficial to one’s physical, mental, or emotional state; conducive to health.” Not sure a croissant fits in here.

It’s not that you can’t or shouldn’t have the occasional croissant, but what kind of message does it send to tell children and parents that a croissant is a healthy breakfast? It can be hard enough for parents to get their kids to eat fruits, vegetables, and other healthy foods, but seeing a croissant defined as healthy by the New York City Department of Education — an organization responsible for more than a million students — it can be incredibly confusing for both parents and children. It’s essentially a stamp of approval saying that a croissant is OK to eat — whenever. And while this particular croissant may meet NYC DOE standards, the photo doesn’t tell us that. The reality is that a croissant has a minimum 250 calories and is high in saturated fat, not to mention that the the ad could give parents and children tacit approval that it’s OK to eat a Chocolate Croissant (in the photo you don’t have any idea what type of croissant it is) every morning. A chocolate croissant has 470 calories — much more than a kid should eat for breakfast and certainly not a food known to improve  concentration for learning in the classroom. 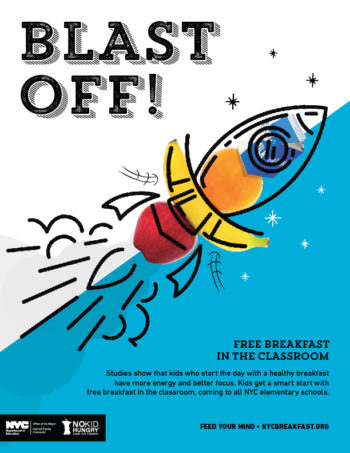 A review and meta-analysis of the available research published in the American Journal of Clinical Nutrition showed that increased exposure to food advertising increases food intake in children overall. In addition, there is significant research showing the people in general, and kids in particular, are likely to be drawn to the foods they see advertised. How many, for example, saw they ad and thought, “Wow, I could really go for a croissant right now.”

In fact, there is a plethora of research demonstrating that images of unhealthy foods stimulate unhealthy eating.

These findings support the need for public health policy that reduces children’s exposure to the advertising of unhealthy foods.

(See below for more research citations on food images and eating).

The good news is that the NYC DOE is doing some positive marketing as well. There are advertisements that do include fruits. This is important because there is strong research that demonstrates that images of healthy foods can increase the consumption of healthy foods. One study implemented a simple intervention by placing photographs of vegetables on cafeteria lunch trays and found that students increased their consumption of carrots and green beans.

One of the most important jobs a parent has is to provide their children with healthy foods. However, unhealthy food marketing to children undermines this parental right and privilege, which can often be challenging enough on its own.

The research shows that food preferences affect children’s food purchase requests, and that these requests in turn influence parents’ purchasing decisions primarily through what is commonly known as the “nag factor.” Additionally, based on an extensive review of the research, the American Psychological Association concluded that most children under the age of eight are unable to understand the persuasive intent of advertisements. In other words, this type of marketing is by definition exploitative because young children don’t have the capacity to understand that they are being manipulated to nag their parents or guardians to buy unhealthy food products.

The Experts and the DOE Respond

We reached out to several experts in the food policy and practice world to get their thoughts and opinions on the NYC DOE’s poster. Here is what they had to say:

“I’m in favor of kids getting breakfast in schools. It saves lots of problems for parents and ensures that kids start the day with some food in their stomachs. It’s wonderful that the New York City Schools are doing this. With that said, the devil is in the details. I assume that all breakfasts meet USDA nutrition standards.

But croissants? These can be delicious—all that butter–but I wouldn’t exactly call them “healthy” and I’m wondering whose bright idea it was to choose that item to display. Looking at the menus for December, they are largely grain-based—bread, granola, tortillas, bagels, cereals, and the like—along with fruit and milk.   I think they look pretty good—they certainly could look a lot worse–but the proof is in the eating. Some parents will hate these breakfasts (too much sugar, too many packages, not enough protein). Others ought to be grateful. Ideally, cooks would be making delicious hot breakfasts for kids in school but that isn’t going to happen and from my standpoint this is a reasonable compromise. Presumably, kids who ate breakfast at home won’t need or take these items. I’d like to see them in action to really get an idea of how this is working.

“Well, I am a huge proponent of universal school breakfasts in low-income schools and have been very supportive of the improved nutrition standards for all school meals and snacks as part of the Healthy Hunger Free Kids Act. I must admit, however, that putting a croissant as the featured food in this poster was a very odd choice. I imagine there are croissants on the market that are small enough, and perhaps made with less fat and some whole grains, that would fit into the nutrition standards, but it still isn’t what I would have chosen to feature in an ad.  It would have made more sense to feature fresh fruit in the poster, as increasing whole fruit is one of the improvements that has been made to the breakfast.

What this poster represents is the dilemma that faces food service directors everywhere.  They want children to be excited about the taste of the food, so they want it to look appetizing, but they also need to let adults know about the nutritional quality of the food. This often means they are featuring foods that kids like (pizza, macaroni and cheese, chicken fingers, and apparently croissants) but that adults think of as unhealthy. I am always listening to parents complain that school lunches aren’t any better than they used to be because it’s still pizza, macaroni and cheese, and flavored milk. It’s tiring to have to keep explaining that the pizza now has a whole grain crust, the cheese is likely low fat, and that the flavored milk is all non-fat.”

“‘Wind in Your Sales” probably doesn’t mean anything to kids today unless you’re growing up on the coast taking junior sailing lessons in the local regatta. That particular metaphor is very outdated unless it’s used on Sponge Bob. Visually – a croissant floating in a boat may create some visual interest but it clearly implies eating croissants is a good thing and especially in summertime, that is if you’re on a boat.  Both of these issues do nothing to support the main print message about…free healthy breakfast.”

“When confronting food insecurity, we consistently conflate ‘any food’ with ‘good food.’ That’s a serious mistake, since the leading health problems among the food insecure are not muscle wasting and overt starvation, but rather obesity, type 2 diabetes, and other chronic diseases related to excess calories, sugar, salt, and all the wrong kinds of fat- and deficiencies of vegetables, fruits, and many nutrients. The notion that a croissant is the right response to a hungry child’s need for breakfast is terribly misguided. A croissant is a treat when visiting Paris, perhaps, but it is very far from an ideal breakfast.”

“…after having just reviewed the literature on breakfast, I would certainly agree with the general claim that a healthy breakfast aids school performance, not to mention seems to have life-prolonging properties. There is, though, of course, the question of what exactly IS a ‘healthy’ breakfast. A croissant as shown on the still image isn’t it though!”

What The NYC DOE Says about Their Advertisement

DOE’s Statement (From DOE Spokesperson: Toya Holness): “New York City’s students are taught not to judge a book by its cover, and its adults should too – these are healthy, low-sodium, whole wheat croissants.”

Additional response from DOE: “NYC DOE’s SchoolFood serves approximately 900,000 meals each day that meet and exceed the U.S. Department of Agriculture Nutrition Standards for School Meals and offers students a variety of menu options to choose from. The goal of this ad campaign is to let families know what healthy options are available at school, and to raise awareness around the importance of making smart choices to support an active and healthy life. The whole wheat, low sodium croissant is one of several items we offer students, and the subway campaign includes posters of four different menu items, including photos of milk, fruit, and an egg and cheese sandwich.” 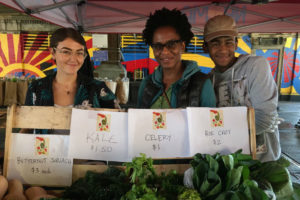 What they do: Uptown Grand Central is a collaboration of small businesses and neighborhood partners along East 125th...
Copyright © 2019-20 Hunter College New York City Food Policy Center. All Rights Reserved.
Back to top
Subscribe To Weekly NYC Food Policy Watch Newsletter
Subscribe to our weekly email newsletter today to receive updates on the latest news, reports and event information
We respect your privacy. Your information is safe and will never be shared.