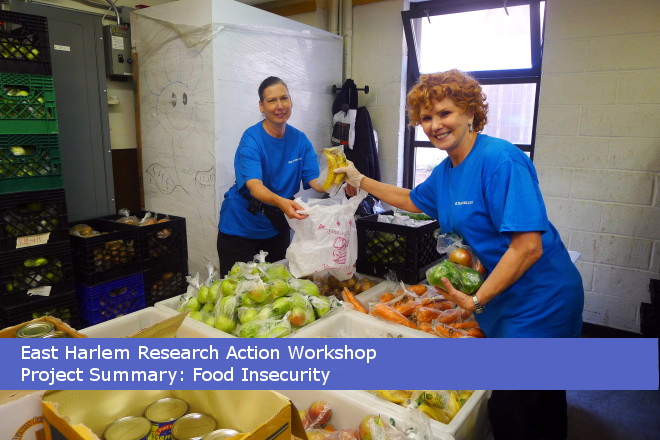 East Harlem, a community hit hard by multi-generational poverty, high unemployment, and health related problems is also plagued by high levels of food insecurity. According to the American Community Survey in 2010, more than 32.5% of East Harlem residents lived below the federal poverty line and more than 48.5% received income support in 2012. In 2011 28.0 percent (11,629) of East Harlem households received SNAP compared to 18.7 percent (571,888) of New York City households overall. The economic recession of 2008 added financial strain on families’ already limited food resources, which were further exacerbated by recent cuts to SNAP. Moreover, the ongoing effects of gentrification on neighborhood food resources are an additional financial barrier. These cuts and uneven patterns of development may have detrimental effects on food security in the poorest areas of East Harlem. Irrespective of incentive programs, another challenge is to make  food choices personal to the consumer and connecting that to their cultural identity.

With East Harlem’s high rate of poverty, it’s important to ensure that these new food initiatives reach the hardest hit neighborhoods  and address their needs effectively. To accomplish this, a participatory system must be enacted to involve residents in creating these new reforms and interventions. We have determined that the best way to address the convergence between the poorest blocks of East Harlem and inadequate resources is via a community-based approach and a participatory decision-making process which may ultimately lead to the development of new policies and programs to benefit this diverse and culturally evolving community.

Each group member conducted unstructured interviews with bodega owners surrounding our respective housing projects of interest. We gathered observational information on pricing and quality of the food available in bodegas in close proximity to the housing projects. Additionally, we discussed SNAP use, culturally available foods, willingness to offer healthier food options and high-demand items. Thus, we have determined that the best approach to address the convergence between the poorest blocks of East Harlem and inadequate resources is a community-based approach that will facilitate a participatory decision-making process. Ultimately, this will lead to the development of new policies and programs that benefit the residents of East Harlem.

We propose the creation of an East Harlem Mobile Market,  a resident-operated mobile farmers market and community led food justice and employment project. The Market, with the support of a local nonprofit to be identified , will visit sites near NYCHA housing developments in East Harlem, bringing fresh, quality produce at low costs to the community members. Peer educators that include  mothers and community leaders from East Harlem organizations, like Community Voices Heard, will be trained to provide classes like ‘Cooking in a SNAP!’, geared towards fast and healthy recipes made with food from the Mobile, and will conduct community teach-ins around food justice. The program will also have a workforce development coordinator based on the mobile providing employment searches and preparation, particularly for food jobs in East Harlem and around the city.