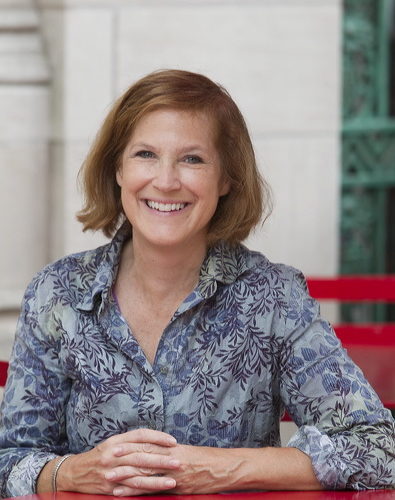 Food is sexy and essential to life. It comes up daily in all kinds of conversations around the world ranging from food policy to dark chef secrets. For the last 17 years, food writer and expert Holly Hughes delved into the food world to come up with the best writing on the subject.

She is the author of “Best Food Writing 2016” (Da Capo Lifelong Books) and, according to the publisher, “from the year’s hottest trends (this year: meal kits and extreme dining) to the realities of everyday meals and home cooks (with kids, without; special occasions and every day) to highlighting those chefs whose magic is best spun in their own kitchens, these essays once again skillfully, deliciously evoke what’s on our minds — and our plates. Pull up a chair.”

Well, we didn’t pull up a chair, but we were able to get Holly’s thoughts via an email interview. Read on.

Diet Detective: Hey, Holly, thanks for the opportunity to interview you. I would love to know how you became interested in food. I’ve heard that you can’t cook and don’t consider yourself a food writer.

Holly Hughes: I can’t claim to be a gourmet cook. I have no culinary school experience and my technique is spotty, but I certainly can and do cook, and I think I turn out some pretty good meals. I cook dinner for my family most nights of the week. I’m just not nearly as accomplished as most of the food writers I work with.

I’m more of a food editor than a food writer. I don’t pitch food stories to magazines or send out proposals for cookbooks. I don’t have a food blog. I’ve deliberately steered away from all that, to avoid being in the awkward position of competing with the writers whose work I select for the anthology. It also means that I have no conflict of interest when it comes to the various publications where these pieces were first published. I can be much more impartial if I’m not a food writer myself.

Diet Detective: Based on your editing of the Best Food Writing series for the past 16 years, what are some of the changes and trends you’ve observed in the food world?

Holly Hughes: More hard-hitting journalism has been focused on food issues in the past 10 or 12 years. Also, I see a lot of food writers trying to expand beyond gourmet snobbery to discuss ethnic foods, regional food scenes, even the pleasures of eating in chain restaurants. Several of our writers have also focused on heirloom foods and sustainability. When we started this book, we didn’t think that farms were part of the food equation: now they are very much front and center.

Diet Detective: Why do you think food is such an integral part of our lives (aside from some of the obvious)?

Holly Hughes: Sharing meals creates community, and what we choose to eat often becomes part of our identity. It’s a way to express nationality, or what part of the country you’re from, or even what your family’s favorite food memories are. However, there’s a downside to this, too. Food has become such a hot topic right now, our food choices often also signify class or political identity or “tribe” of some sort. That’s a tricky part of our current culture wars.

Holly Hughes: I certainly hope that food writers have influence. So many people who didn’t think about these issues are now conscious of them thanks to the work of food journalists such as Barry Estabrook, Rowan Jacobsen and Dan Barber, who’ve all contributed to our book in numerous editions. I would never have expected Michael Pollan’s books, which we’ve regularly excerpted in Best Food Writing, to reach such a wide audience, and yet he’s become more or less a household name. This can only be good for the food systems movement. These writers not only articulate the issues, they do the research and footwork that proves their points.

Diet Detective: What are some of the food issues you’ve read about that concern you or keep you up at night? Are there food behaviors of your own that you’ve changed over the past 16 years because of what you’ve read?

Holly Hughes: I do get distressed by the horror stories about how we raise animals for food. That has certainly made me more willing to pay more for humanely-raised meat and eggs. And after having read so many pieces about the need to support farmers, I’ve become an active member of a CSA (community supported agriculture group).

Diet Detective: How would you describe healthy foods?

Holly Hughes: The less processed a food is, the better. That’s almost axiomatic by now. I don’t get too picky about something being labelled “organic” — that’s become a slippery term. I’d put more emphasis on buying local and seasonal products; nutrients are often lost the longer it takes for a food to land on your table. And let’s not overlook the importance of eating a balanced diet. It helps if you actually like kale and know how to cook it!

Diet Detective: Can you provide a few quotes from food writers that stand out as representative of some of the changes we’re experiencing with relation to food?

Holly Hughes: I was really moved by a poignant piece in the 2016 edition from Debbie Weingarten’s Edible Baja Arizona, which is about a farm couple deciding to stop farming: “One thing remains certain: if, as a society, we don’t prioritize the health, well-being, and financial solvency of our farmers, we will lose them by the droves — along with all of their precious resources, talents and skill — and along with our food.” That really hit home. But I think where Best Food Writing’s greatest value lies is in drawing the connections between wonky policy stuff and the popular culinary culture. I love this quote from Kim O’Donnel from our 2014 edition: “The thing is, home cooking is a serious business. It is a conscious decision to turn raw ingredients into a meal to nourish ourselves and the people we love. The food system is more than crops and livestock; it’s what we humans do with them.” I also think we have a role to play in speaking truth to power. Here’s The Washingtonian’s Todd Kliman (2013 edition) on what locavorism has come to mean: “In the last 30 years, ‘local’ has evolved from an ideology to a movement to something that looks suspiciously like an ism: more important than any single chef or restaurant — more important, too, than any other philosophy or ideology.” And I’ve gotta love Tracie McMillan’s Slate piece (2013 edition) pushing back against elitists preaching the values of home cooking: “When you have no choice but to cook for yourself every single day, no matter what, it is not a fun, gratifying adventure. It is a chore. On many days, it kinds of sucks.”

Diet Detective: I know you’ve curated and edited many food essays — can you tell us which two or three stand out (in terms of influencing food systems change, food policy, healthy, mindful eating, etc.) and why?

Holly Hughes: There’s no disputing how important Michael Pollan’s work has been in convincing a wider audience of the importance of having a big-picture perspective on our food systems. But although it’s a bit of a Sophie’s Choice moment — I really hate to rate any one author above the others — I myself felt really moved by Jill Wenthold Silva’s piece on food deserts from the Kansas City Star (2011 edition); and by Barry Estabrook’s 2013 piece on heritage pig farming (wonderfully expanded in his engrossing 2015 book “Pig Tales”).

Diet Detective: If you had to cook one healthy meal, what would you choose?

Holly Hughes: I don’t think I could pick just one healthy meal. I try to cook healthy meals most of the time. I am particularly fond of vegetarian chili (I make a really good one) and a tasty clean-out-the-refrigerator stir fry that mixes a lot of stuff together. I prefer improvising like that rather than meticulously following a recipe. However, usually I’m cooking for my family and have to navigate around the picky eaters’ preferences. That’s not so much fun.

Diet Detective: What was your process for picking the essays for your latest book?

Holly Hughes: It’s pretty organic. I read a lot. I subscribe to several magazines, and I browse through even more online. The proprietors of my local culinary bookstore recommend titles to me. And I’m in continual contact with a core group of writers who’ve been in the book in years past and are always pointing me to great things they’ve read.

Diet Detective: Do you have a favorite food?

Holly Hughes: No one favorite food. Sometimes, I’ll eat a lot of something for a while, just trying to figure out the best way to prepare it. I might have a butternut squash phase, or a lentil phase, for example. But I tend to like variety.

Holly Hughes: I’m about to go on a trip, so I’ve tried to use up a lot of things in the past few days. I’m aware of a bunch of collard greens and a couple of leeks that I need to use up — they won’t be so good when I get back.

Quick thoughts on the following:

Holly Hughes: That’s one thing I’m addicted to that I shouldn’t be, I know.

Holly Hughes: They serve their purpose, but I prefer to eat simple and fresh.

Holly Hughes: I rarely use them. I don’t even take a multivitamin. I prefer to get my nutrients from actual foods.

Holly Hughes: I’m not as worked up about that as some people are.

Grew up in: Indianapolis, Indiana.

One word you would use to describe our food system: Monolithic

Food hero: No one in particular

Food website(s) you read: I love Eater.com and SeriousEats.com, because they yield so many provocative essays I can use. CivilEats.com does very well at highlighting food policy issues. And I’ve been impressed with how The-Atlantic.com has stepped up its coverage of food issues — props to editor Corby Kummer for keeping this front and center.

CHARLES PLATKIN, PhD is a nutrition and public health advocate and founder of DietDetective.com, and the Director of the New York City Food Policy Center at Hunter College. Copyright 2016 by Charles Platkin. All rights reserved. Sign up for the free Diet Detective newsletter at www.DietDetective.com 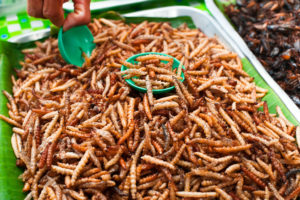 By Lani Furbank Around the globe, at least 2 billion people eat bugs, according to the U.N. Food and Agriculture Organization....
Copyright © 2019-20 Hunter College New York City Food Policy Center. All Rights Reserved.
Back to top
Subscribe To Weekly NYC Food Policy Watch Newsletter
Subscribe to our weekly email newsletter today to receive updates on the latest news, reports and event information
We respect your privacy. Your information is safe and will never be shared.