Food Policy for Breakfast: Eric Holt-Giménez: Food First/Institute for Food and Development Policy, Putting the Public Back in Food 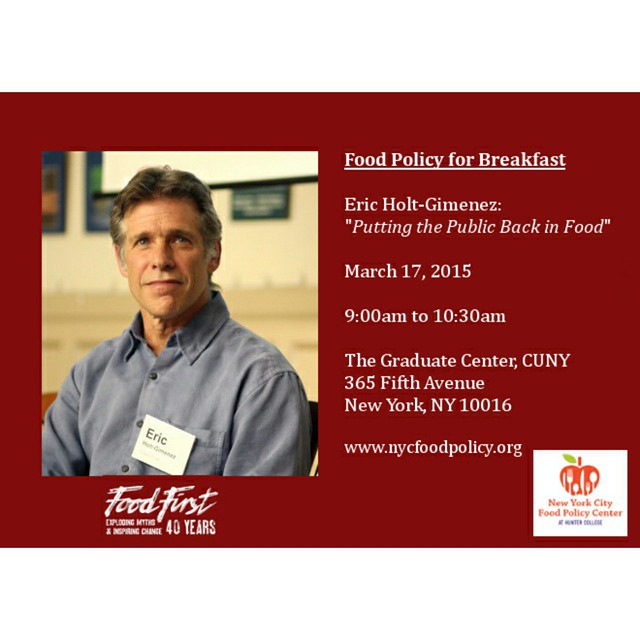 Part of our Spring 2015 Food Policy for Breakfast Seminar Series.

On March 17th, in honor of the 40th Anniversary of Food First / Institute for Food and Development Policy in Oakland, California, Food Policy for Breakfast will present   Eric Holt-Giménez , who will speak on  “Putting the Public Back in Food.”  He will describe the vanishing public sphere and what local food activists can do to resist the increasing privatization of the food system. As Eric states, today’s food system has been shaped by the privatization of public goods and the deregulation of corporate capital, leading to the highest levels of global inequality in economic history…. In many ways the community food movement, with its projects for a fair, sustainable, healthy food system is rebuilding our public sphere from the ground up.”

With more than 25 years of experience working with farmers in Central America, Eric Holt-Giménez joined Food First as its Executive Director in 2006. His book, Campesino a Campesino: Voices from Latin America’s Farmer to Farmer Movement for Sustainable Agriculture, tells the story of the spread of sustainable agriculture through farmer to farmer methods in Central America, improving livelihoods for hundreds of thousands of rural families.  His 2011 book Food Movements Unite! Strategies to Transform Our Food Systems brings together grassroots voices from around the world to address the critical question: How can we unite to transform the global food system?